Despite late planting out and poor summer weather, we have actually had a crop of tomatoes. The cherry tomatoes 'Totem' wern't as successful as last year in terms of yield and both those and my 'Tigerella' tomato plants succumbed to what I think was blight.

All was not lost however, and we've had a fairly decent harvest from both varieties, albeit mainly green ones which will need ripening off the vine. The 'Tigerella' haven't produced the colour and stripes that I expected and haven't grown as large as they probably could have but I'm just pleased to have harvested something! 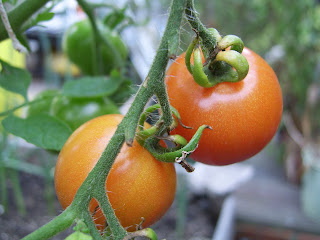 Throughout this rainy summer we have continued to battle with slugs. However, despite their grim determination to eat every last seedling, we did manage to get a salad garden underway and have been enjoying an abundance of fresh rocket leaves for weeks now. We also have some leaf beet and kale growing which is our tiny attempt at winter crops this year along with the jerusalem artichokes that have been in the ground all year. 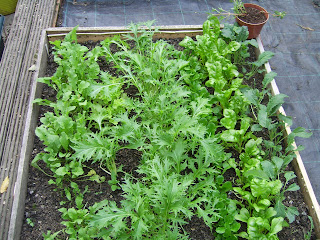