Today I had a go at making paper pots to sow the first seeds indoors and I still can't get over how simple they are. After a brief experiment I've found that doubling up and using two strips of paper seems to make a sturdier pot and three strips is a bit too much and they have a tendancy to unravel more. I knew the business section of the newspaper would come in handy for something! 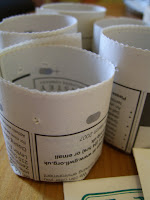 Today nursery tower was created too. Using a wire veggie rack that we inherited when we moved in, I've given each tray a base of thick cardboard covered with a layer of bin liner for a bit of waterproofing followed by a decent layer of newspaper. The paper pots then sit on the top.
I've got some clear polythene sheeting now which I intend to use for homemade cloches outside, but I'll use some of it to make a cover for the nursery to help keep the seeds in a nice, warm environment. 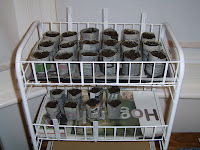 Seeds that have been sown today are:

This morning we also pruned the mature wisteria that is trained over the kitchen door. It was looking really messy and woody as we suspect the previous owners might not have known to prune it. We've given it a good renovative pruning and once new shoots have formed, we'll fix up a frame work on the wall above the door using wire and vine eyes and properly train the new shoots on to that.

More double-digging has been done today and the edging has been finished around the second bed so the veggie patch is slowly starting to take shape.

These pots look great. Was the little pot-maker expensive?

I've just sewn some Tigerella, some Moneymaker, some chilli peppers and sweet peppers. Watching the seeds come up is so exciting.

I got the paper potter for £10 so not expensive at all. Especially knowing that I don't have to replace any tired old plastic plug trays.

There are a few places online that sell them so maybe try typing it into google (not sure if you live in the UK or elsewhere.) I got mine from www.harrodhorticultural.com which is where I got my ground cover sheeting.

Thanks for that. I think I may be very close to you geographically, as I'm in SE London too (BR3)

I'm a little puzzled as to why you would need to use more than one sheet at a time, Kim. I use The Sunday Times and tear 8cm wide strips from top to bottom. They then wrap around the dobber thingy many times making very sturdy pots!

I have a metal ruler also that makes the tearing of multiple pages easier and true.

Ah, perhaps I didn't explain that very well. I use the same size strips as you mention, however I 'double up' using two layers of paper one on top of the other and roll the two around the pot as a double layer.