Life has been rather hectic since moving in here pretty much this time last year. Since deciding to convert the raised lawn area in our new garden into a productive organic veggie garden last Autumn, we have made considerable progress (well, we think so anyway) however, with so much going on over the last year, we struggled to find the time to do as much in the veggie garden as we would have liked.

That said, the raised lawn area was converted at the start of the year into four raised beds and work area to one side. The soil in each raised bed was lovingly double-dug, the drainage improved and the soil was bolstered with organic compost.

A fair amount of seed has been sown and there has been a fairly even split of successes and failures when it came to actually growing things. We have learnt many lessons along the way though, which I think at this early stage of our veg growing life is just as important as actually managing to grow something to harvest and eat from your first attempts. 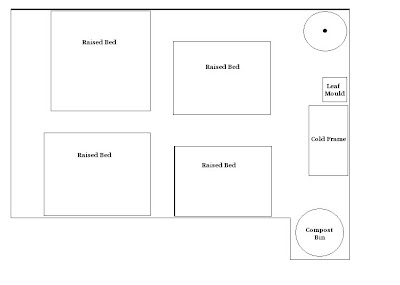 The veggie garden layout as it is now...

We have struggled to grow enough to fill all four beds this year for a variety of reasons. We also realise now that our original plans for what we wanted to try and grow needed a lot more time then we were able to find over the last year.

So, in an attempt to make more of the small space we have, a slight change in layout is planned. I'd really like to create a backdrop of ornamental planting and learn more about growing various different ornamental plants as well as growing crops for us to eat.

In a few weeks time, the two raised beds at the back of the veggie garden will be removed and one larger border will be created in their place. This will provide a larger growing area overall and allow us to plant directly into the ground, rather than in a raised bed. This border will be a mixed planting of ornamentals and edibles.

Under the huge viburnum in the back corner, I plan to create a mini wildlife garden by sowing perennials and bulbs for attracting lots of bees and butterflies, allowing plants to run to seed for the birds, create a small rockery for other small creatures to make a home in, provide a small wood stack for more little creatures and also include a basin of water if possible to try and attract an urban frog. I am hoping that by attracting more wildlife to the garden, they will help me to protect my crops from the baddies in the garden (slugs, you know who you are)

The front two raised beds will stay put and will be used more intensively. I will also try to limit the amount of things we will try and grow, for the next year at least, to give us a better chance of success. We can also grow various things in pots on the terrace too. 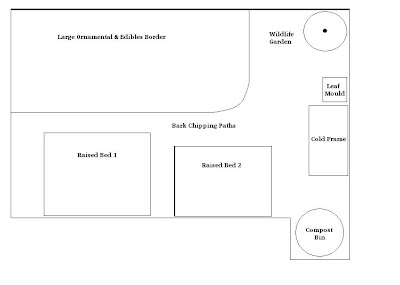 Once we have removed the timber from the two raised beds at the back, that whole area will be given a thorough digging then will be sown with hungarian rye green manure to help improve the soil and supress the weeds over the late autumn and winter months. This will be dug in when spring arrives and the border will be edged using the little pile of bricks we have in the garden. We will keep the front raised beds available for winter crops and if any spaces in them become available, they can also be sown with green manure.

I like your attitude about learning things as well as getting something to eat. It's important to take a long view.